Established in Oud-Beijerland, the Netherlands since 2005, Ben de Kruif, director / owner of Mitrex B.V. to achieve his aspiration.

A great deal has happen before the above mentioned establishment took place.

In 1990 started as a one-man company in the maintenance and repair of forklifts business. This developed so fast that new mechanics had to be added in the short period of time. The required workspace became a part of a farm barn in Barendrecht which was rented for this purpose. It turned out to be not the most ideal work environment because of the cold winter months that forced water to freeze and mechanics to return home with dirty hands.

Two years later Ben came into contact with the forklift truck company Moerman & Robbers in Heinenoord, a company originally from Rotterdam, founded in 1913 that was engaged in the maintenance of internal transport equipment, the sale of parts and dealer of Clark Forklift trucks.

After the takeover of Moerman & Robbers in 1996, Ben also decided to become a dealer for Miretti Italy, which was engaged in the sale of explosion-proof systems for forklift trucks. In 1997, Ben went one step further by installing and developing the explosion-proof systems themselves, which made the workshop quickly too crowded. A new location was established in Oud-Beijerland on the industrial estate ‘De Bosschen’. This building was for five years the location where Miretti Benelux developed into a very independent and innovative company that was ready to grow. Simultaneously with this development, the owner of the property decided that he wanted to use the entire space for himself, which forced Ben to find a new location.

After searching for a long time and not being able to find a suitable existing location, Ben decided to have a new building built on the new ‘Hoogerwerk’ business park on the other side of Oud-Beijerland.

This new building followed with the decision of Miretti Italy to break the relationship with Miretti Benelux after 10 years of collaboration. Since then Ben has been walking around for some time with the idea of ​​expanding his business outside the Benelux. Unfortunately this was not possible in the collaboration with Miretti Italy, for that reason, new opportunities were to be created.

September 2005 saw a month of major changes: the opening of the new building in Oud-Beijerland, and the commissioning of the new name Mitrex B.V. This was followed by expansion of the sales market by also providing Scandinavia, Ireland and England with explosion-proof solutions. All these impulses resulted in an rapid growth of Mitrex. 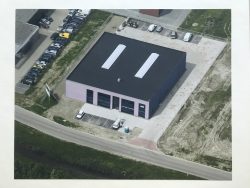 The property offers the possibility to provide all possible internal transport equipment with explosion-proof and soot filter systems by the familiar team of skilled employees and all the necessary equipment.

All employees of Mitrex are technically well-qualified. This is not a convenience but a requirement because of the systems that Mitrex manufactures and sells comply with the European ATEX standard and the applicable standards regarding the limitation of harmful exhaust gases.

The explosion-proof systems that are built by Mitrex must prevent the machines from being used to ignite explosive substances and gases that are used in, e.g. the petrochemical industry, gas filling stations, fireworks depots etc.

In order to be able to carry this responsibility, the ISO 9001 quality system has been integrated into the organisation and all workshop staff have been qualified ATEX.